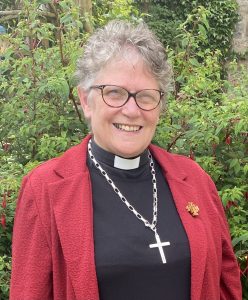 Maggie has lived in Aberdeen since 1979 when she moved here via Edinburgh from Lanarkshire. Her two daughters, Heather and Ruthie, are Aberdonians.

She lived in Torry for 25 years and it was there that she became a Member of the Church of Scotland at Torry St Fittick’s Church during the ministry of Rev David Hutchison. She worked in various roles in the congregation including Safeguarding, Christian Aid Convener, Brownie Guider and Youth Leader, and was Ordained as an Elder.

After her daughters started school Maggie worked for a number of years in Community Work with young families in the Torry area of Aberdeen. A change of career saw her train as a Remedial and Sports Massage Therapist and she set up her business in Huntly Street in the City Centre, never expecting that another call would be made on her life.

The return to education, to Aberdeen University to study for a Degree in Divinity at the age of 46, followed a Church of Scotland Assessment Conference where she was accepted to train for Ministry of Word and Sacrament. Maggie completed her training and placements in Aberdeen in 2008 and spent 15 months at Rubislaw Church as a Probationer under the excellent guidance of Rev Andrew Wilson.

In February 2010 Maggie was called to serve the congregation and Parish of Aberdeen St Stephen’s Church where she had previously completed a Student Attachment. With the support of this hard-working and welcoming congregation Maggie has enjoyed 11 years of Ministry including work in her own areas of special interest – with young people in Holiday Clubs, Girls’ Brigade and local schools. Along with members of the congregation Maggie set up a Drop In for people who are experiencing difficulties with their mental health – the Y-Knot Drop In has run successfully for over 9 years

Maggie says, ‘I feel honoured to have been asked to take on the role of Moderator of the Presbytery of Aberdeen and Shetland and hope you will join me in praying that I don’t cause too much havoc during my time in office’.