We say a huge thank you to the Rev. Mark Rodgers for his years of service as Lead Chaplain at NHS Grampian, providing spiritual care and support to patients, families and staff in often very difficult circumstances.

Mark explains how he came to be in this role and how it has changed over the years:

Mark’s experience included Woodend Hospital and Aberdeen Royal Infirmary and taking up an important leadership role from 2012. He managed a team of chaplains. He explains:
“I became Lead Chaplain for NHS Grampian in succession to the Rev Fred Coutts, although still based in Aberdeen Royal Infirmary. I managed a team of Healthcare Chaplains that covered all the main hospital and healthcare sites across Grampian. It was a team of just under 11 full time staff, that was constantly changing over the years and I am grateful for the loyal support and endeavours of my colleagues down through those years”.

The formal links with the Church of Scotland ceased in 2005 but the Presbytery maintained its close relationships with the chaplaincy team.

As he takes up retirement after many years of service Mark reflects on his experiences and looks to the future:

“I am really grateful for the privilege of serving as a Healthcare Chaplain, which for me came to an end on 30th November 2021, exactly 18 years after I started. I am intending for the foreseeable future to stay in Aberdeen and remain a member of Presbytery, a Presbytery which will in the near future expand and mirror the geographical extent of NHS Grampian, and include  Orkney and Shetland, from where many of NHS Grampians’ patients come . I am sure that the support that I have received will continue for my successor, Gillian Douglas, and the rest of the NHS Grampian Healthcare Chaplaincy team in the future.” 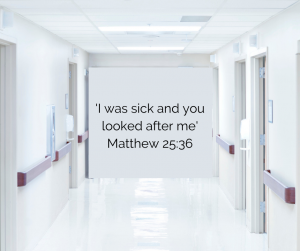 At a recent Presbytery Meeting, the Moderator paid tribute to the enormous contribution Mark has made to Healthcare Chaplaincy and the sincerity, dedication and commitment he gave to this role. We wish him a happy and relaxing retirement and we are pleased he will continue as a member of Presbytery. We look forward to working with Gillian Douglas and wish her well in her new post.