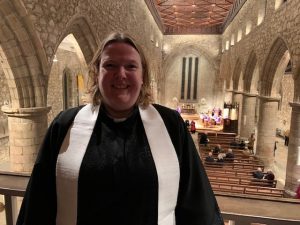 Rev. Sarah Brown was inducted as the Parish Minister of Church of Scotland’s, St. Machar’s Cathedral on Tuesday 23rd November 2021. It was a service attended by members of the Presbytery of Aberdeen and Shetland, colleagues from Sarah’s career, family and friends from near and far. Her faith journey has taken her from Glamis Kirk, volunteering for the Iona Community, Princeton Theological Seminary, USA, Glasgow Cathedral, Castlemilk Parish Church in the South East of Glasgow and now to St. Machar’s Cathedral Aberdeen.

Sarah’s upbringing was on a farm outside Forfar, Angus with her parents and two older brothers. She attended Glamis Kirk as a child, where her mother was an elder and it was there that her foundations in the Christian faith began. Her interest in people led her to study Sociology at the University of Aberdeen, so she is very familiar with the city and its surroundings. She moved to Glasgow and became a student youth worker at St. Paul’s Church in Provanmill and later served three churches in Govan and Linthouse as a youth and community worker. It was Davey the janitor at Govan High School who planted the seeds of interest in Sarah considering the ministry. She says, ‘Every morning he would say to me ‘Hello Minister’ and I would correct him and say I’m not a minister, I just work for the church, but he would joke with me and say ‘ah but you’re our minister’.

Sarah undertook her ministry training at New College, Edinburgh and went onto study at Princeton Theological Seminary, New Jersey, USA as a Presidential Scholar. The Very Rev Professor Sir Iain Torrance, now Pro-Chancellor at the University of Aberdeen, was the President of the seminary at this time and was present at the Induction service. She says, ‘It was great to meet peers at the seminary from around the world, who continue to sustain ministry through friendships’. She returned to Scotland after this and completed her probationary time at Glasgow Cathedral, under the supervision of the late Rev Laurence Whitley. She was then the parish minister in Castlemilk 10 years. She says, ‘We united two congregations and built a new building in the time I was there. It was a period of transition for the two congregations at Castlemilk to become one, and faced much of what other churches will be looking at in the next decade. I was sorry to leave such a wonderful community, but know God will have great plans for what is next for them’. 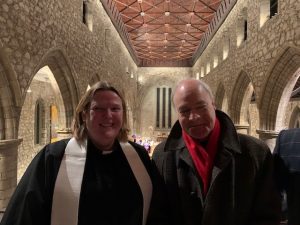 Masks were removed for the purpose of photographs only

Reflecting over her career and her journey of faith, Sarah says, ‘I felt a sense of something beginning on my first visit to Iona Abbey at the age of 19yrs, with a student group from the University of Aberdeen. It was about a deepening understanding of God, but also in faith and justice issues that was a key part in understanding how faith can be put into action. I saw for the first time that young people could be so involved with church and I felt there was a place for me. This transition to St Machar’s feels like a death leaving Castlemilk and a resurrection to a new life in Aberdeen. There is hope and joy in this new beginning and I am excited to see what God has in store for us all’. 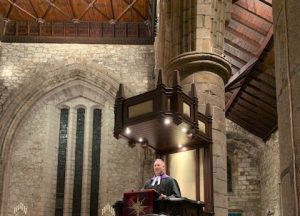 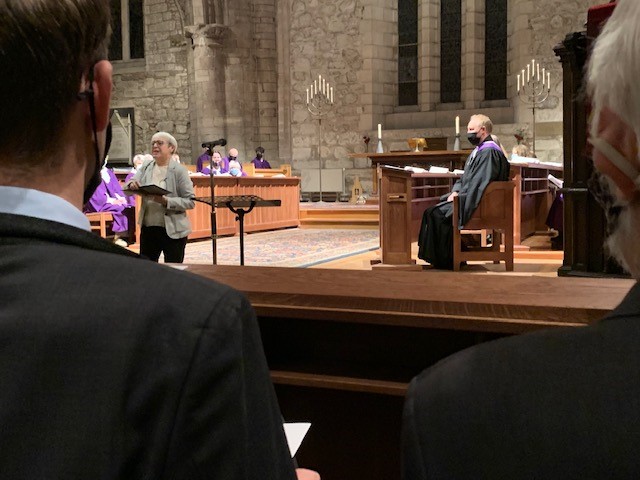 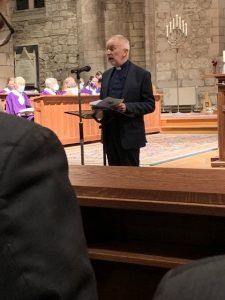 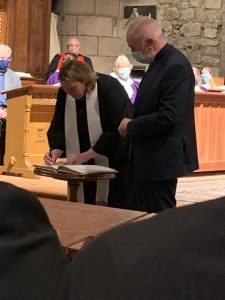 Signing of the Formula 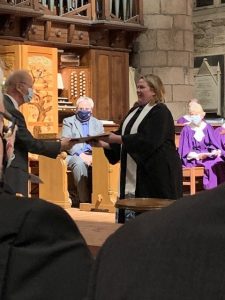 Presentation of the Call by Mr. Alan Grant Session Clerk 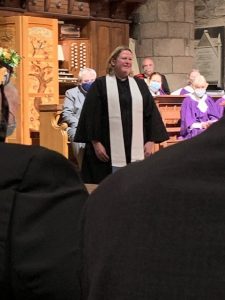 Sarah is charged and welcomed as Parish Minister 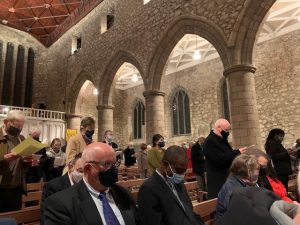 Sarah is settling into her new manse and has been supported by her family and friends and of course her two collie dogs, Darcy and Annie.

We wish Sarah every blessing as she embarks on this new stage in her life and we trust and pray she will find joy and contentment as the Parish Minister at St. Machar’s Cathedral.