Rev. Ian Murray has been appointed as Building Of 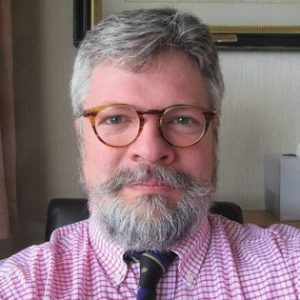 ficer for the Presbytery of the North East and Northern Isles. Ian has been involved in the restructuring and repurposing of churches and congregations for some time and his experiences earlier in life have shaped his interest in this new role.

The Church of Scotland is appointing six Building Officers across Scotland to follow through with their 2019 Radical Action Plan to reshape how church land and buildings are used.

He says, “From my young adulthood and time as an apprentice joiner, I’ve always had an interest in buildings and how we use and adapt them for our needs.  Over the years, as well as being involved in building projects within the church, I’ve owned and renovated several properties in Edinburgh, and more recently, over the past three years, managed the significant restoration of Kilmorie House in Elgin, which my family now run as a guest house with additional self-catering accommodation. I’ve always been familiar with the building and construction industry, and I’m currently undertaking post graduate studies through the Royal Institute of Chartered Surveyors to gain a basic qualification as a building surveyor. Between winding up my Interim Ministry commitments to the Kirk of St Nicholas and St Mark’s Aberdeen, and studying something of a “crash course”, this is a very busy but hugely exciting time.”

Ian’s role will involve assessing the needs of congregations and communities to make decisions about the condition of buildings, their potential, their location as well as consideration of churches’ financial situation and long-term plans. He will be reviewing the church buildings within the Presbytery  and drawing up an ongoing care and maintenance programme.

For many congregations their church building is fundamental to their identity. Seeing their buildings close or be sold will be a difficult process of change for many people. Ian speaks of ‘encouraging church communities to find new identities’ and working collaboratively as the Church of Scotland plans for developing ‘well equipped spaces in the right places.’

Ordained in 2002 to the linked charges of Tenandry with Blair Atholl and Struan in Highland Perthshire, Ian served as a Parish Minister in his first charge for eight years before being inducted into the West Angus Area Ministry in 2010 where he worked in the team ministry covering an area roughly from Glenshee to Glamis.  Prior to this, he studied theology at Aberdeen and Palliative Care at Glasgow Universities, having previously come from a Social Work background. However, having grown up and attended school in Aberdeenshire and Morayshire, Ian firstly served his time as a construction joiner and carpenter with William Grant and Sons, Glenfiddich Distillery, Dufftown.

It was in 2016 that he moved into Interim Ministry and spent 18 months in a charge, helping the congregations address issues of disagreement and conflict within the church and wider community, find a new identity with the formation of a new Kirk Session and a change of constitution, and help the congregations prepare the ground for a new settled parish minister.

Following this, as Interim Minister for the East of Scotland, Ian was instrumental in drawing up the radical Presbytery Plan for Shetland which would see a major restructuring of the seven parishes to a single parish, the proposed reduction of church buildings from 33 to 11, and the formation of the new Presbytery of Aberdeen & Shetland. Ian also served as Presbytery Clerk to Shetland during that time, and was appointed Interim Minister to the Parishes of Lerwick St Columba’s, Gulberwick and Bressay in the midst of significant restructuring.

Since 2019 Ian has worked on an accompanying basis with the Kirk of St Nicholas Uniting in Aberdeen, latterly, overseeing the dissolution process of the Local Ecumenical Partnership, Charity, and Church of Scotland Congregation. Since Jan 2021, he has been working with the Presbytery of Aberdeen & Shetland and the Church of Scotland General Trustees, exploring future options for the St Nicholas building, in consultation with civic and wider organisations in Aberdeen.

Consecutively, he has also been working with the congregation of St Mark’s Church, Aberdeen, exploring ways of repurposing and redeveloping the St Mark’s Building (sanctuary and basement halls) in the context of exploring new opportunities and expressions of mission and outreach in the wider city centre of Aberdeen.

Ian has such an interesting career background from carpentry, social work and ministry that will provide him with the expertise he needs to serve in this role competently, caringly and compassionately for all of us.

He moves from his current post as Interim Minister for the Church of Scotland in May and work towards completing exams to become a certified Building Surveyor and start his new position in June 2021.

We wish him God’s blessings as he undertakes this huge task to manage and develop our buildings as we move forward with the 10 year Presbytery Plan and the union of Presbyteries in 2023.

“Unless the Lord builds the house, the builders labour in vain that build it!”