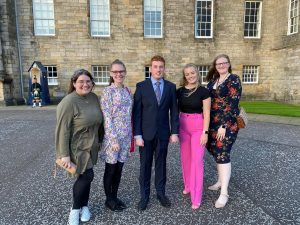 Youth Representatives at the General Assembly May 2022

Our Presbytery Youth Representative, Matthew Philip reflects on his time at the General Assembly and his personal involvement in church life.
He says,

This year’s General Assembly was significant in so many ways, the most poignant was the passing of legislation to allow Same Sex Marriages within the Church of Scotland.

Another area close to my heart, is the importance of young people within the Church of Scotland. I chose to speak on this topic during the Faith Nurture Forum and asked the following question in the Assembly Hall: “There are mentions of engaging with the Under 40s and how to ensure that they are included in the life of the Church. What guidance has been given to Presbyteries about engaging with the Under 40s, in terms of how they can get involved at Presbytery level within the Church and when will the Faith Nurture Forum, in partnership with the Under 40s Task Group be able to start planning and organising these residential events for the Under 40s similar to the events that were planned before the pandemic?” I felt confident conveying this to the Assembly and overcoming my nerves.

I was also somewhat disappointed that there were only five youth representatives, representing presbyteries across Scotland. However, I feel that we took advantage of the opportunities afforded to us during our time at the General Assembly and we felt driven to make contributions to debates in the Assembly Hall. I really enjoyed meeting up with other people and making new friends with the other Youth Representatives from across Scotland.

This year’s General Assembly has been one to remember, as, I look back at my journey so far in being a faithful member of the Church, helping my Dad with his elder duties when I was only four and over time becoming more deeply involved in the future of the Church. My daily life is involved with Aberdeenshire Council’s Passenger Transport Unit, and I think of the Church’s journey that is in front of me, where we together look at all possibilities to include the younger generation in the life of the Church of Scotland, and react to the ever-changing situations around us, not only in the UK but around the world.

Now that I have turned twenty-five, this will be the last time that I will be able to be the Presbytery’s Youth Representative, according to the current General Assembly Standing Order 35. It has been a privilege and an honour to represent the Church of Scotland as your Youth Representative. I have learned so much over the past five years, whether it has been representing Presbytery or what was known as the National Youth Assembly before it was dissolved in 2019, these experiences will always come to mind and will be in my memory for the rest of my life.

I look forward to being with you all and working towards our future as a fully inclusive congregational body around the world. I am sure that our paths will cross as I look towards my future within the Church. 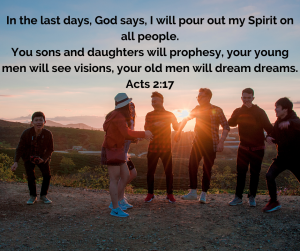 We thank God for Matthew’s service in the role of Presbytery Youth Representative and his work in the church and pray for God’s blessings in all his future endeavours.