Professor David Hewitt shares with us the progress with the restoration project at St. Machar’s Cathedral 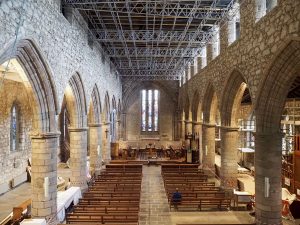 At an elders’ conference in November 2015, the Kirk Session of St Machar’s Cathedral decided to prepare for a large-scale physical transformation of the church. The pews were of very poor quality and uncomfortable, and they were perched on a concrete plinth that was at once breaking up, a trip-hazard, and unsightly. The ceiling, the most important feature of the whole building, had gradually been dimmed by a kind of white film which looked most alarming.

The stained-glass windows needed attention. The roof had to be replaced: it was last reslated in 1867, and was now shedding slates in great numbers, and letting in water which endangered the ceiling below. In addition the ancillary facilities were poor: for instance there were only two wcs in the whole building—quite inadequate for the number of visitors who come to the Cathedral. 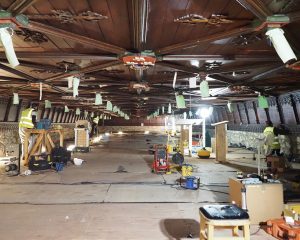 The Kirk Session asked Mark Hopton of LDN Architects of Edinburgh and Forres to advise it, and in the light of what he suggested, and on considering the financing of a project on this scale, the Kirk Session divided the project into three phases. The pews and the floor came first because a legacy had been left for that purpose and because the work was going to be so dirty that it had to be done before work on the ceiling commenced. In a two-month period in 2018 Harper and Allan of Keith installed a new sandstone floor, and new pews were designed and supplied by Luke Hughes of London.

Phase 2, the roof, the ceiling and the windows, was more demanding. Under the direction of the architects the Session  undertook a comprehensive survey of every aspect of the fabric: we received specialist reports on the state of the roof timbers, on asbestos, on the stained-glass, on the carved wood and paint of the ceiling, and we received advice from masons and slating experts. These necessary preliminaries cost about £100,000. The Kirk Session required that, as far as possible, the Cathedral be kept open for worship and visitors, and as a direct consequence it became clear that the biggest challenge by far would be the design of the scaffolding. The whole scheme was priced at £1.853m by the Quantity Surveyors Morham and Brotchie. 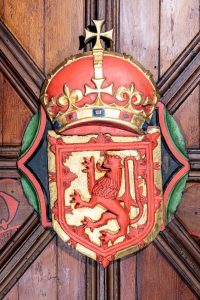 The finance was daunting: but the Kirk Session committed the whole of its Fabric Fund, and we applied in a single joint application to the National . Lottery Heritage Fund and Historic Environment Scotland. The breakthrough came in June 2019, when they awarded grants of £300,000 each. Since then application has been made to many trusts, to the congregation, and to the public. The National Churches Trust and the Garfield Weston Foundation each gave £50,000, and the Allchurches Trust £34.000. At the time of writing some £78,000 has still to be raised. Tenders were invited for architectural services; LDN was appointed. Graeme W. Cheyne Builders of Aberdeen won the main contract, and the conservation work was subcontracted to Rainbow Glass, Charles Taylor Wood Conservators, and to Scottish Wallpainting Conservators.

Work was due to start on 30 March 2020: but of course we were locked down by the covid emergency. It began in earnest at the beginning of July. 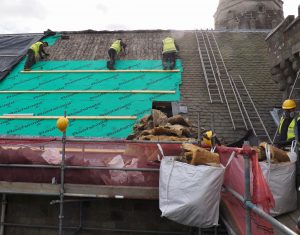 From the outside it is clear what has been achieved by the end of 2020: the north side of the Cathedral has been reslated, and the south side has been cleared. But of course there is much more; for instance all the leadwork is also being replaced. It is inside that there has been a transformation. To get the conservators to the ceiling Cheyne’s erected an astonishing scaffold in which aluminium frames spanned the nave from the clerestory openings; it looked more like the Pompidou Centre in Paris than anything we normally see in Aberdeen.

The wood conservators secured the carved timbers (some were loose), and made dozens of minute repairs. The paint experts cleaned the ceiling (the white film came off easily), fixed loose paint, and filled in where paint had already flaked off. The stained-glass has been cleaned and repaired.

What has still to be done: the rest of the slating, of course; the new clerestory windows have to be inserted; a new lighting system to illuminate the ceiling has to be installed. The work will be complete by Easter.

When the contractors have gone we shall see a revolution. Already the stained glass is vivid in the horizontal light of winter. The ceiling, even although there is little natural and no electrical light, is glowing from the darkness. It will be a visual revolution.

St Machar’s is the oldest building in use in Aberdeen. It is also the earliest Renaissance church in Britain. We have inherited a building dating back six centuries, and it is our responsibility to hand it on in the best possible condition to our successors. The ceiling was erected 500 years ago, and it seemed right to celebrate the anniversary by restoring it, and allowing it to be seen and appraised afresh. It is a work of art of international importance. And we acknowledge our responsibility to Aberdeen: tourism will be essential to the City’s future after oil; 32,000 people visited the Cathedral in 2019, and we expect it to be more in the future.

But above all the ceiling is Scotland’s greatest symbol of our Christian faith. The shields in the ceiling are arranged in three ranks: the nobles of Scotland led by James V King of Scots to the south, the Kings and Queens of Europe led by the Holy Roman Emperor to the north, and the clergy of Scotland led by the Pope, Leo Xth, in the central rank. All western Christendom is united, and all its people are heading towards Christ whose image would have once hung in the chancel. Let me quote the words of a former minister at the Cathedral, the Rev. Dr Alan Falconer: 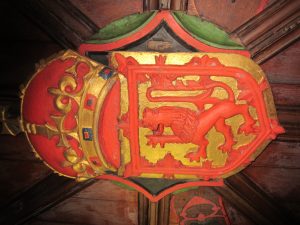 The ceiling is a tangible expression of that which the Psalmist enjoins:

Praise the Lord, all you nations!

Extol him, all you peoples!

For great is his steadfast love toward us,

and the faithfulness of the Lord endures forever.

The heraldic ceiling is a visible reminder that all life points to and is sustained by God in Jesus Christ through the Holy Spirit. All creation reflects the love and faithfulness of God. The congregation throughout the ages has responded with praise and thanksgiving. Indeed the very walls and stones of the Cathedral resonate with the strains of the praise of centuries.