Laurie was born in Dundee and after leaving school in 1944 aged 16 and served his time as a baker at Keillor’s before being called up in 1945 for National Service in the RAF where he became a Telegraph Operator. In April 1947 he sailed for India. India made a huge impression on Laurie, witnessing the deprivation of the people there, and he determined that, on his return to Scotland he would find a way of spending his life helping people.  His options seemed to be teaching or ministry and the call to ministry won through with Laurie going back to his baking skills to pay his way through a Licentiate in Theology at St Andrew’s University. From an early age, Laurie had a passion for films, and one day, on the road to the pictures, he took a different route where he met May Main, a Life Boy Leader who suggested he might come along to help out. He agreed, and it was there that he met Mabel Beats. After some time Laurie asked Mabel what she thought about being a minister’s wife!  Mabel’s recollection is that she replied ‘It would depend on who the minister was!’  They were married on 9th April 1958.  Laurie was still studying at St Andrew’s and had asked for the morning off. This was refused, so he went to Uni in the morning and rushed back to Dundee for his wedding at 3 p.m. Theirs was a close and happy marriage, blessed by the arrival of two daughters Alison and Christine.

Laurie was ordained and inducted to the Pastoral Charge of Kelty Oakfields in May of that year.  This was a happy ministry, with Laurie putting his principles of ministry into practice. Love; charity; tolerance and service to all people and all those in need.  In 1968 Laurie was inducted to the Parish of John Knox (Mounthooly) where he served faithfully until his retirement in 1995.  Laurie and Mabel made a lasting impression on the congregation caring and sharing the love of Christ through worship and service, a ministry which he continued in retirement as Locum or Interim moderator at the North Church of St Andrew, Craigiebuckler, Denburn, Ruthrieston West and Kingswells.  Such a rich ministry was not forgotten by the many who gathered for Laurie’s funeral on 16th February. At his request the funeral service was ably conducted by daughters Alison and Christine  and we were all the richer for our attendance.

Laurie was also a faithful Presbyter and Moderator of Aberdeen Presbytery in 1986, and contributing to Committee work, willing to speak his mind and always graciously with humour.  Over these last years, Laurie and Mabel were a valued presence at our retired ministers and spouses monthly lunches where we put the world and the church to rights.  These occasions were always enriched by Laurie’s breadth of knowledge, razor sharp wit and deep faith which pervaded all. 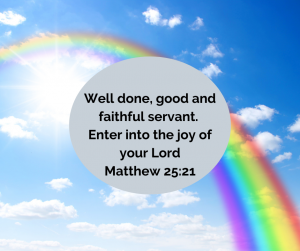 Our thoughts and prayers are with Mabel, his beloved wife and soulmate, daughters Alison and Christine and the extended family as they remember a life well lived in the service of Jesus Christ.